Leadership: Should Team Members Earn or be Given Respect? 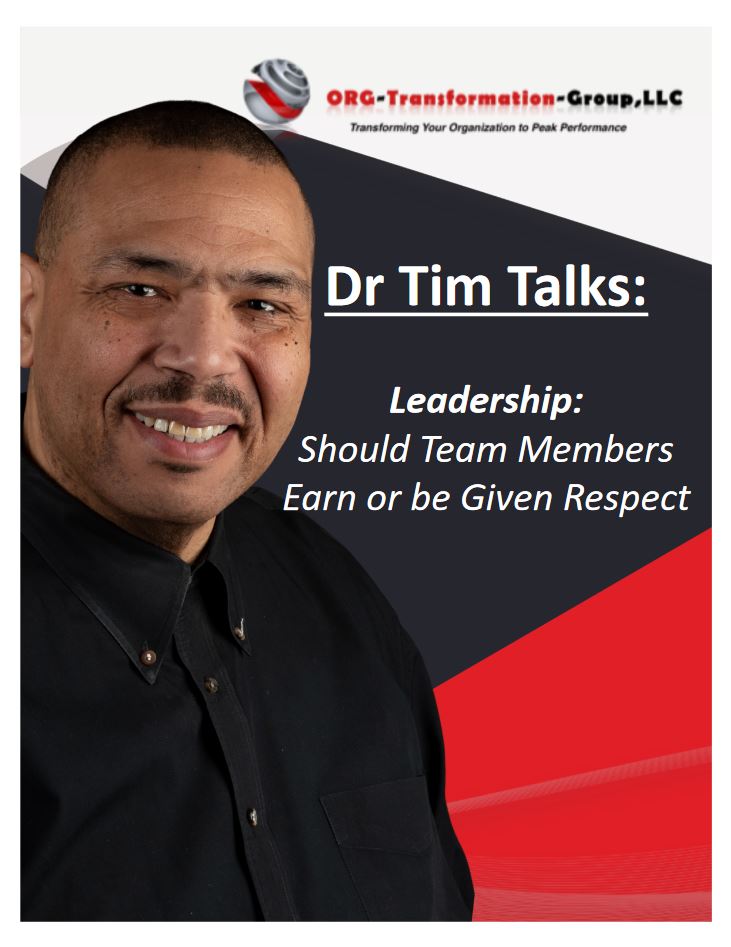 Leadership: Should Team Members Earn or be Given Respect?

I often here the point of this question conveyed in situations where individuals are conveying how they begin purposeful relationships and establish a relationship posture that allows them to negotiate the boundaries that will define their relationship on-going. In my experience (I believe your experience probably is the same), most acknowledge their posture of allowing the person to prove their worthiness to earn respect. Most perceive it risky to give respect until it’s proven to be deserved. In this writing, however, I will pose for your consideration that actually giving respect is what positions the individual to respond in the relationship in away that will eventually earn your respect. Respect should not be seen as a payment for a product delivered, but as an investment that a Leader makes, because they have a surety that the investment will yield an expected valued return.

Because respect and behaviors that express and demonstrate respect are culturally sensitive, and in some situations, “individual” sensitive. I’d like to offer 2 definitions of respect that will support my thoughts for how a Leader can give respect as an investment that yields a return. In our English dictionary respect is defined as “a feeling of deep admiration for some one or something elicited by their abilities, qualities, or achievements”. This would likely fit for our capitalistic culture that rewards action and achievement. In this definition the admiration/respect is because the person has abilities, qualities, and achievement that merits or earns respect or admiration. Again, this would be acceptable for most, but not for an effective Leader. Leadership at its core isn’t a “responsive” behavior! Leadership is a strategic “initiating” behavior that is focused on creating empowerment and engagement in the follower that inspires them to fully commit their value, loyalty, capability, and their vision to the Leader’s cause. No, it’s not wrong to respect a person to express recognition and value for what they have done. However, an effective Leader knows leadership has to more often to give before they expect to get. With this in mind, let me offer another definition of respect that is more suited for the Leader that has decide to “BE” an “initiator” versus a “responder” in this area.

In the Hebrew language the definition of respect is a simple one, but does offer many implications for a Leader that wants to“BE” an “initiator’ versus a “responder” when it comes to Respect. The Hebrew definition of respect is “to look intently at;hence with recognition implied, to acknowledge,be acquainted with,to care for”. I really like this definition of respect because it is not a function of behavior that earns respect! It defines respect as an “action” initiated by the person being respectful versus a “feeling” as stated in the English definition! To look, to acknowledge, to be acquainted with, and to care for are all behaviors that give respect. It’s not the responsive behavior that you give when you admire and cheer for a sports figure that’s just made the game winning goal. However, it’s more of the admiration and respects you choose to give when you notice an expensive diamond in a jewelry store!! The diamond takes no action, but you give it your attention which acknowledges it’s worthiness! Looking closer you become better acquainted with what you are beholding in anticipation of investing! After the investment you will care for it because of the value it has and the future value you expect! The diamond does nothing to earn your investment, but you choose to give it respect because of its perceived intrinsic value!!

A Leader should treat his followers as diamonds! They should “BE” respectful to every person and every follower as a diamond because their posture is that every person has value. For an effective Leader, an individuals value is presumed to be a surety because of their humanity! Those who you initially can’t behold their value should be considered as “Diamonds in the rough”! It’s the Leader’s responsibility to shape them into the diamond their humanity and own desires destines them to become! Give your team member Respect and it will empower them to earn your Respect!!!

Stand up and Lead!

We’d love to connect with you. Request a callback, just drop your phone number in the form below and hit the request.